A Legend Begins, As Does an Art Competition

Two queer feminist geeks walk into a cafe. It sounds almost like the start of a joke, doesn't it? Well, sit down, young 'uns, and I'll tell ye a tale.

Jessie and I first met in a pub surrounded by LARPers. We didn't talk much, at first, but we started to realise after a while that we had a few things in common. We both liked LARP, for a start. We also both liked opera, and sang it. We also both thought it was a damn shame that there were so many singing ladies, like ourselves, at the start of what could be a promising career if only there were enough roles to go around. And we were both feminists and activists, and our activism coloured our ideas of what we thought opera could be.

Eventually we decided that we might as well have a proper chat, away from the pub full of LARPers, about opera. And so, a few weeks later, two queer feminists walked into a cafe, and the rest is history.

Some time after that, the same two queer feminists walked into the foyer of the Royal Festival Hall, ordered a cup of tea each and an orange meringue, and started talking about Better Strangers in earnest - all the things we loved, and all the things we wanted to play with. And the result was as follows: 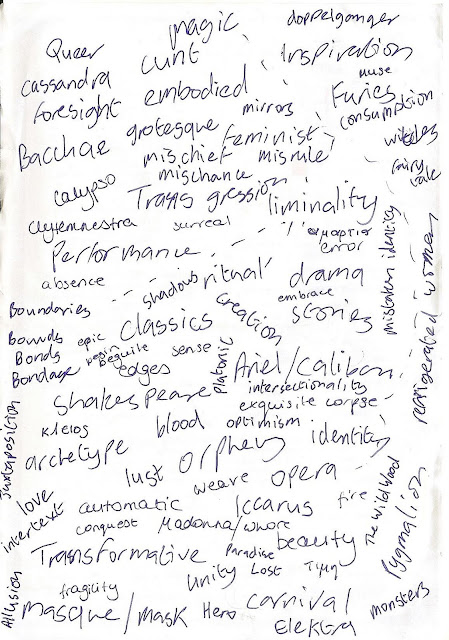 Now that our little baby project is all growed up (*sniff*), we're thinking we'd quite like to make this little scrap of paper into some art. Only neither of us is much good at drawing or graphics or anything snazzy like that, so this is where you come in!

Are you good at making things look nice? If so, consider this a prompt. If you can make this little baby scrap of scribbles into a big, sexy work of art, we will put your name on it and it will be used on pretty much all our publicity, ever. So your amazing art will be immortalised on the Internet, flyers, posters, funding applications and all sorts, and we will tell all our friends and funders how brilliant you are. :)

There's no deadline as such, but the sooner the better. Some time in the next 10 days to 2 weeks would be super ideal.

Have at it, you wonderful people! Submissions should go to betterstrangersopera[@]gmail[.]com.
Posted by theviciouspixie at 12:35 PM